I’ve crept into a meme called ‘I Heart TV’started byThe Moiderer . The purpose of this meme, apart from giving everyone a good read is to increase the TV programmes Dawn can watch. Nickie at Typecast  has also joined in. 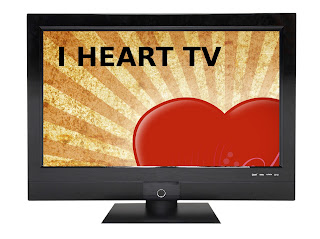 Premise (posh for what it is about!):

It’s basically a cop show with the delicious Simon Baker playing a consultant(Patrick Jane) who seems to have psychic powers. In truth he doesn’t but he does have a genuine talent for reading human behaviour. He uses these keen observational skills to create a profile & to almost trick the culprits & so leads the team to solve the crime. His ‘laid back’ approach really gets up the noses of lots of the bosses but when he manages to help close so many cases, they can’t get rid of him (which annoys them even further!)

I really like the interaction between the characters & the fact that Jane doesn’t give a fig for what the others think of him. Sparks fly with Jane & the female lead but he maintains that ‘Trust me’ approach which always gets him what he wants (in the nicest possible way!)

A thread runs through each episode which gives it a ‘must keep watching’ element. Jane’s wife & daughter were killed by a serial killer called Red John in retaliation for Jane boasting that his paranormal abilities helped the police profile Red John. Jane is determined to see Red John caught & will do anything to get close to achieving it.

The programme has been around for a couple of years I think but we’ve only just started watching with the latest series (2).OH is a fan as he like the way the character comes across as a bit of whimp but is able to manipulate the criminals & get his own way without reverting to violence.

Now, I know the rule was only one programme but I have to mention that the Mentalist has a similar programme in The Medium (see the connection!). The lead character IS a medium as well as being a mum to 3 girls & wife to a great guy. She sees things which help the police to solve crimes. I love it for the family life that you see as well as the gentle approach of the main character.

So there you have it! I tag the following to carry on this meme:

Nicki at Clinically Fed Up

Now the rules of the meme, as usual: